Donate Plasma for Money at These Donation Centers that Pay

I couldn’t be more thankful for the plasma donation centers near me.

February 2019 was one of the scariest times of my life as a parent. My toddler son had been sick constantly for the six months prior. He had back to back illnesses that could not just be brushed off as the typical daycare germs and illnesses anymore. It was more than that.

I fought for further testing because I knew deep down there was more to this. His constant illnesses were not normal. And I was right; there was much more to his story. I was not sure what to expect. However, what I was not prepared for was the term “childhood leukemia” to come out of his pediatrician’s mouth.

My world was turned upside down. What did this mean for him? How could we help him? How would we begin his treatment? What were the treatment options? Our lives were forever changed.

Plasma transfusions are one of the many treatment options on the list of helping patients with leukemia. I never thought I would be so thankful for opportunities such as plasma donations as the day when I found out my son might need it. People who donate plasma for money give families like mine hope.

What is Plasma and What is It Used For?

Plasma is known as a transporter of cells and other important substances in the body. It has multiple functions in the body including clotting blood, fighting diseases, and other critical needs.

In general, plasma is typically used for trauma, burn, and shock patients. Patients with other diseases and clotting deficiencies are also among those who receive plasma transfusions.

How Often Can I Donate Plasma?

According to the FDA, plasma donations can take place once in a 48 hour period with a maximum of twice in a seven day period. The body must be able to replenish itself before being able to donate again. Following a healthy nutrition, the body should be able to replenish the plasma that was donated within 24 to 48 hours.

How Much Does a Plasma Donation Pay?

During my research, I found the 21 highest paying plasma donation centers and compared the compensation fees donors receive. On average, centers pay $30 per donation or up to $400 per month if donating the maximum allowed times. Additionally, some companies offer rewards programs to allow for more earnings.

Who Can Donate Plasma?

Requirements for plasma donations vary by location. In general, donors must be at least 18 years old and must not weigh less than 110 pounds. After this initial criteria, donors will have to go through a medical screening. This screening includes the completion of an in-depth medical questionnaire.

When visiting a plasma donation center, these items will be required:

If you are someone who has recovered from COVID-19, you may still donate. Review your medical history with the professionals at the donation center to determine eligibility.

Related: How To Make Money From Robocalls

In addition to the compensation for plasma donations, many people don’t realize that plasma is one of the few components that cannot be artificially created and is in high demand. Therefore, human donations are highly sought to help save the lives of people all around the world.

The drive to donate plasma for money is enticing, however, don’t forget about the difference you can make in the world with each plasma donation!

21 Plasma Donation Centers That Pay (Near Me)

In order to donate plasma for money, it is important to know if there are any centers close by to visit. You might be surprised at how many plasma donation centers are available across the United States. 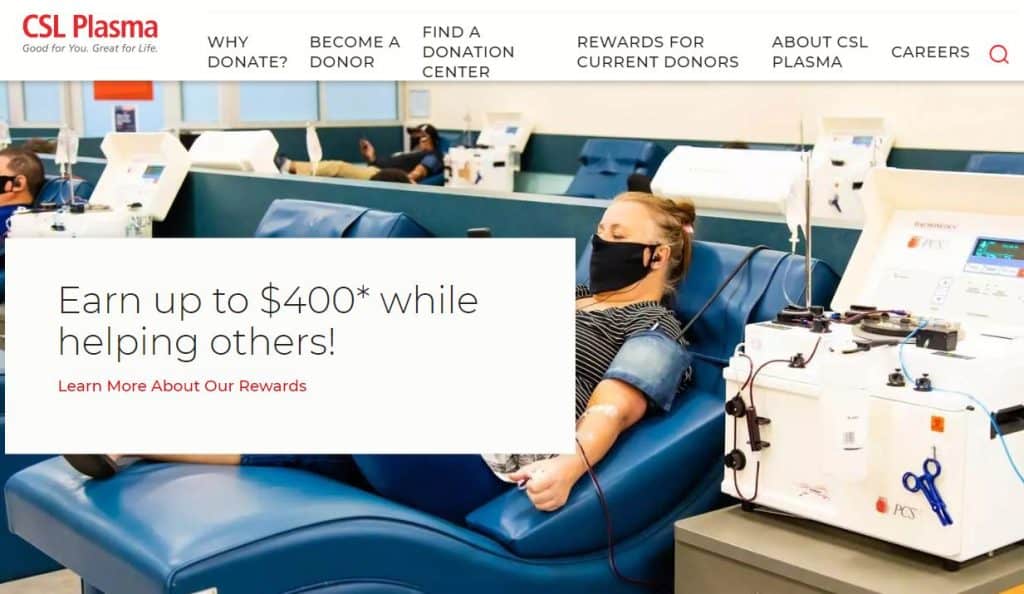 Commonwealth Serum Laboratories (CSL Plasma) is one of the world’s largest plasma collection networks. Its headquarters is located in Boca Raton, FL.

Locations: Over 250 Locations in 39 States

How Much It Pays: CSL Plasma advertises earnings of up to $400 per month for new donors, received on a reloadable prepaid card. Actual payment amounts will vary by location.

Donors are eligible for rewards as well. CSL Plasma utilizes iGive Rewards which gives donors points for every completed donation. These points can be saved up to use towards redemption of gift cards and other prizes. Compensation varies by location. 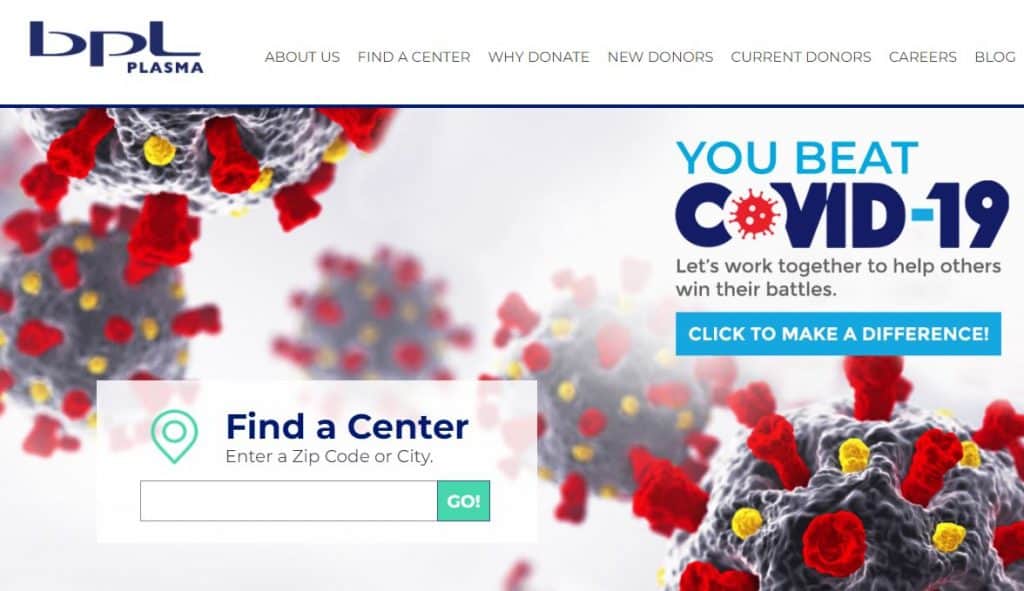 Bio Products Laboratory (BPL) is a UK based plasma collector. They have been a global leader in the plasma industry for over 25 years.

Locations: Over 50 Locations in 13 States

How Much It Pays: In conjunction with promotions, referral fees, and donation fees, BPL advertises that recurring donors can earn up to $300 per month. Specific fees and promotions vary by location. 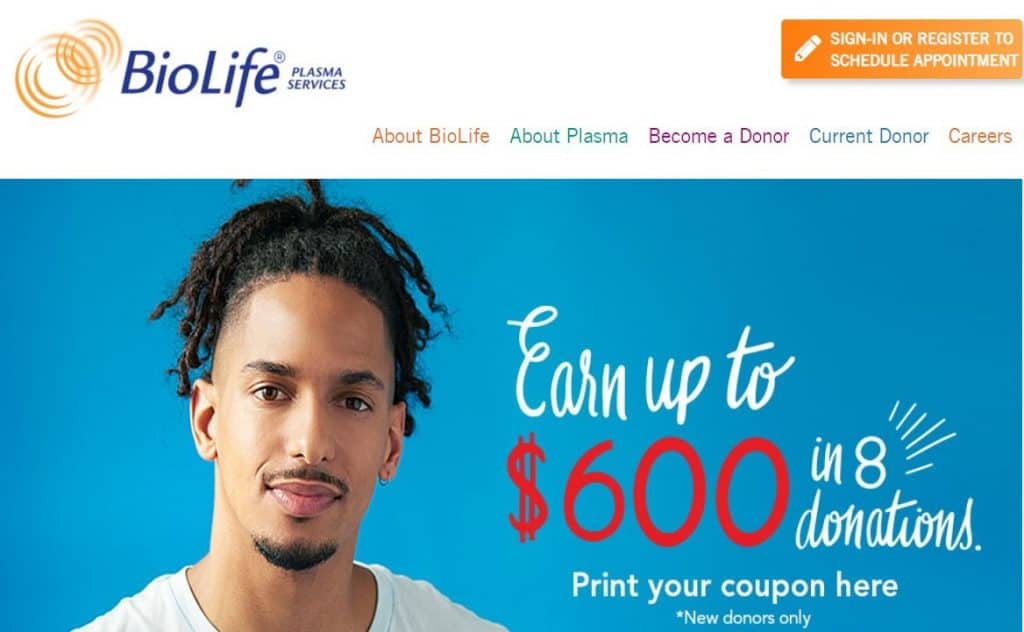 BioLife Plasma is a leading plasma collection service in the plasma industry. They operate in numerous facilities within the United States as well as Austria.

Locations: Over 120 Locations Across 31 States

How Much It Pays: BioLife Plasma donors are given a debit card which their compensation is loaded onto. For new donors, the average pay is about $20 for the first visit and then the pay ranges from $30-$50 for following visits. Compensation amounts vary by location. 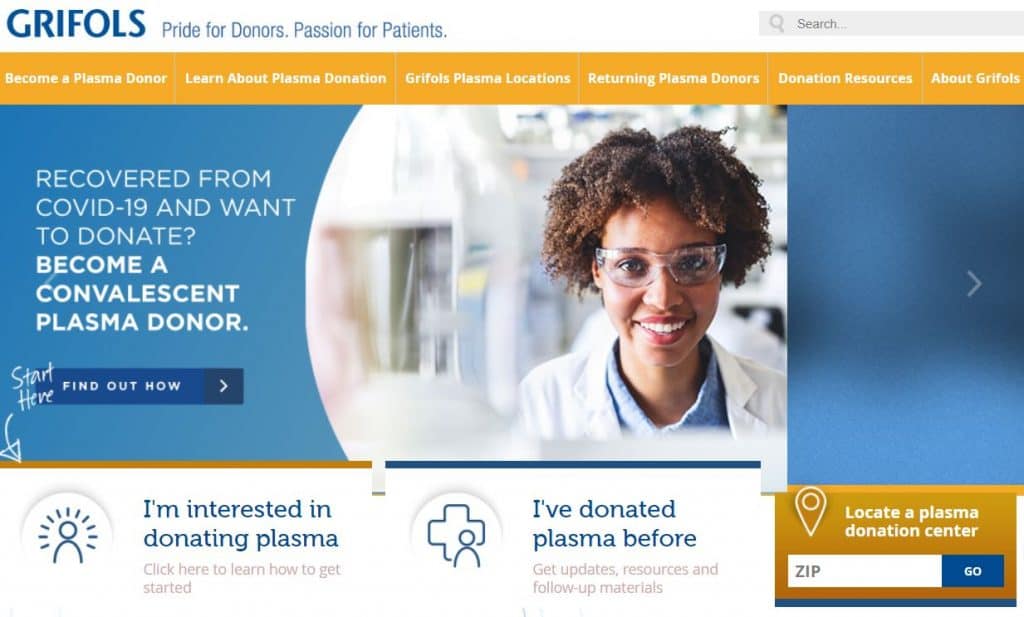 Grifols is a healthcare company known worldwide since 1909. They are one of the largest plasma science companies in the world.

Locations: Over 250 Locations in 33 States 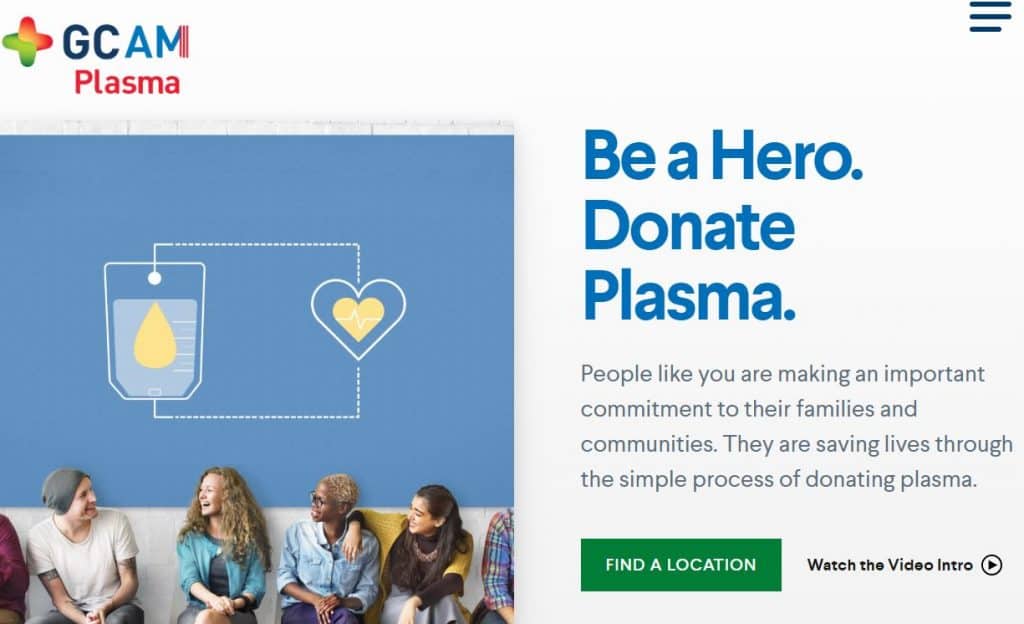 How Much It Pays: GCAM pays donors between $25-$30 per donation. Additionally, returning donors are eligible for a bonus program with prizes and rewards. Exact compensation amounts will vary by location. 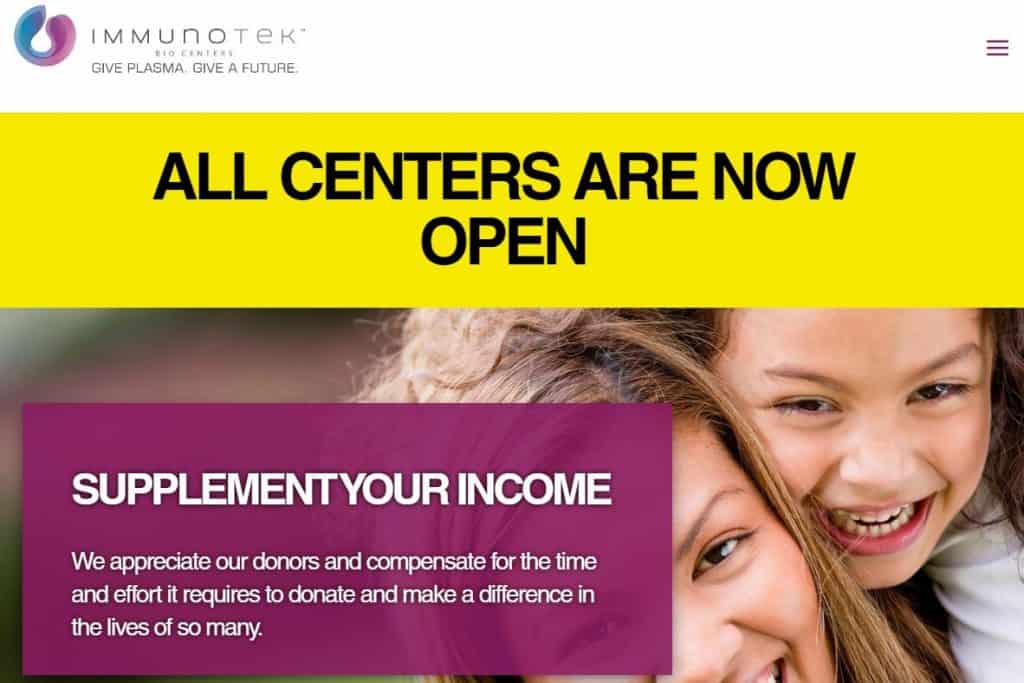 ImmunoTek Bio Centers is an emerging bio-tech company committed to the safe collection of human plasma.

Locations: 13 Locations in 11 States– Located in southern and eastern states 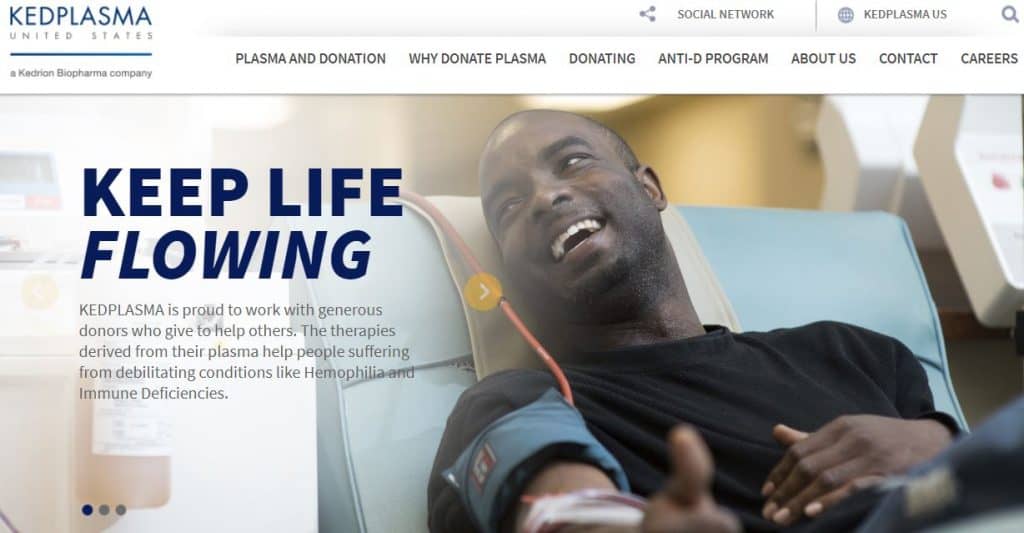 KEDPLASMA was established in 2004 with the mission of collecting high quality plasma. They are a subsidiary Kedrion Biopharma, which is a company specializing in producing and distributing plasma-derived medicinal products.

How Much It Pays: In previous years (2018), donors have earned up to $400 per month when donating through KEDPLASMA. The payments are made through a prepaid debit card. A more recent compensation fee has not been published. Check with the donation center for specific fee amounts. 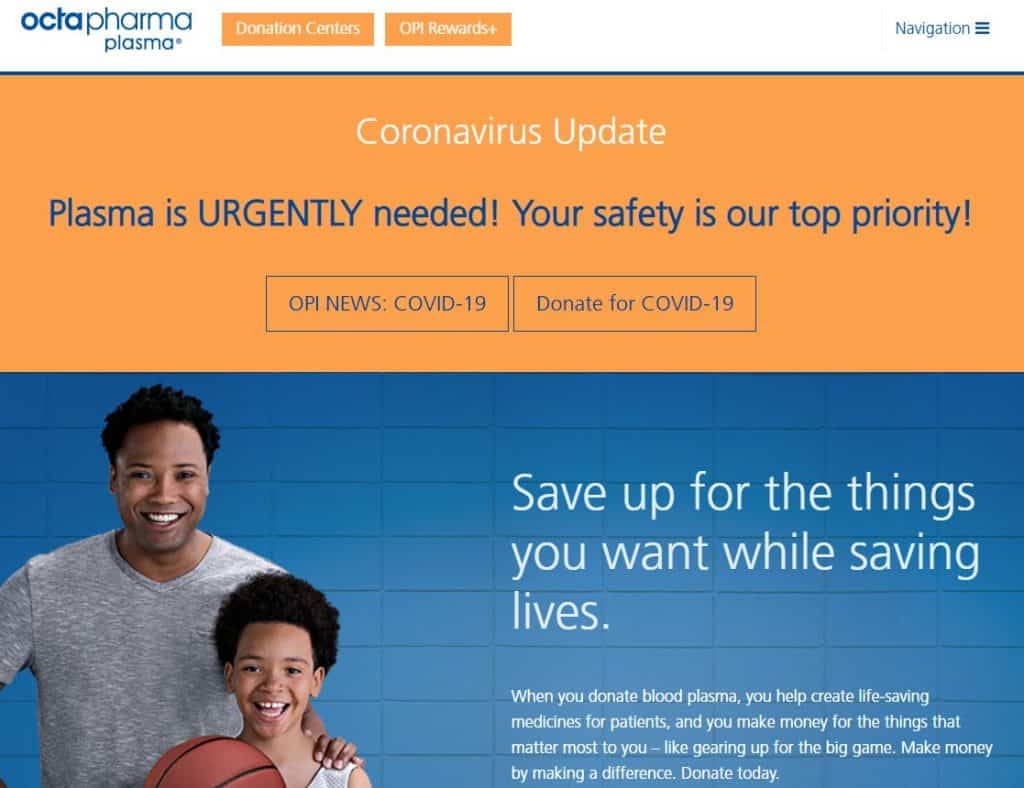 Octapharma develops and produces high quality human protein from human plasma. They are the largest privately owned and independent plasma fractionator in the world.

Locations: Over 110 Locations in 34 States

How Much It Pays: New donors to Octapharma Plasma can earn up to $400 per month with the New Donor Promotion. Returning donors can earn a higher amount and be entered to win prizes and other rewards throughout the year. Fees and rewards vary by location. 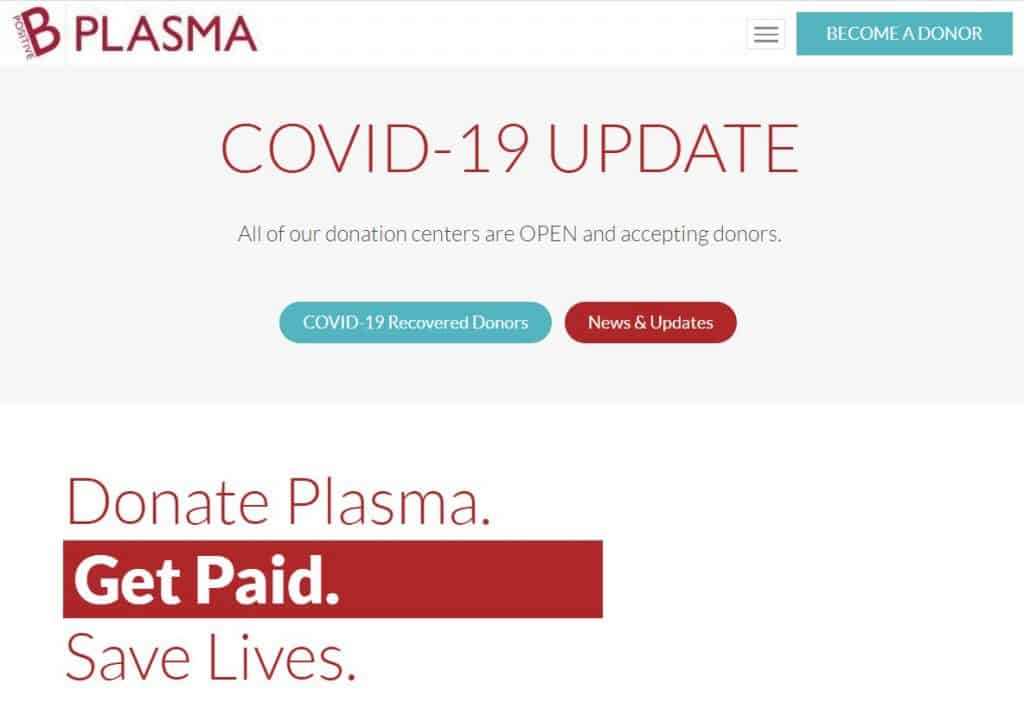 B Positive Plasma is a plasma collection business collecting human plasma from donors to provide life-saving therapies to others.

Locations: 2 Locations in the state of New Jersey

How Much It Pays: B Positive Plasma donors can earn up to $500 per month when donating regularly in conjunction with the referral incentive. Funds are deposited on a prepaid debit card. Specific compensation amounts vary depending on the location. 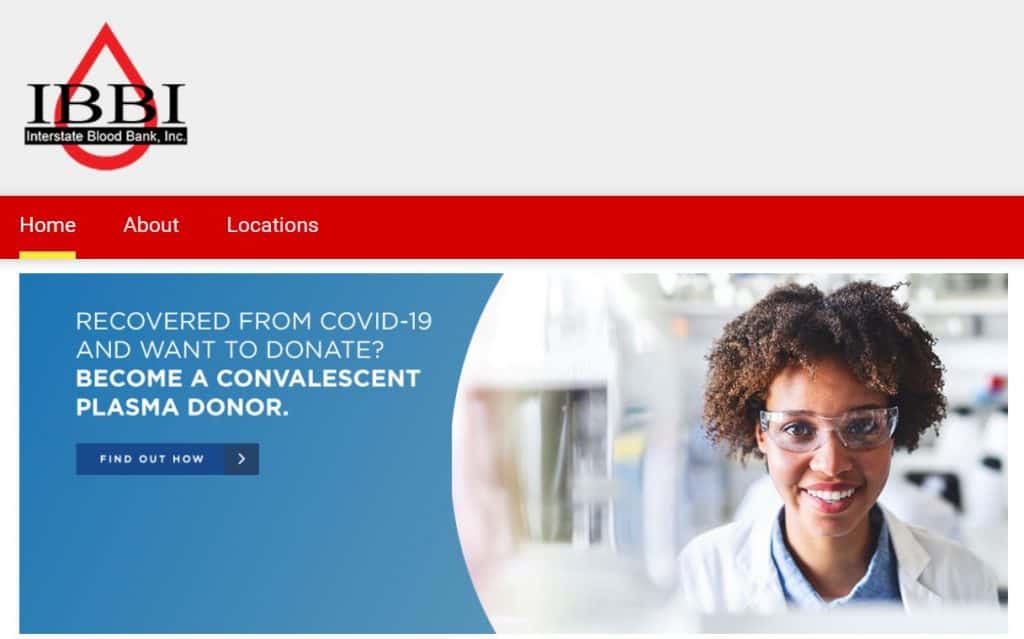 Interstate Blood Bank, Inc. (IBBI) is a company specializing in the collection of whole blood and plasma. This company has been in business since 1949 with their headquarters located in Tennessee.

Locations: 36 Locations in 15 States– Locations are among the east coast states with some in Texas and Florida.

Related: 16 Easy Summer Jobs That Offer A Fun Way To Make Some Money 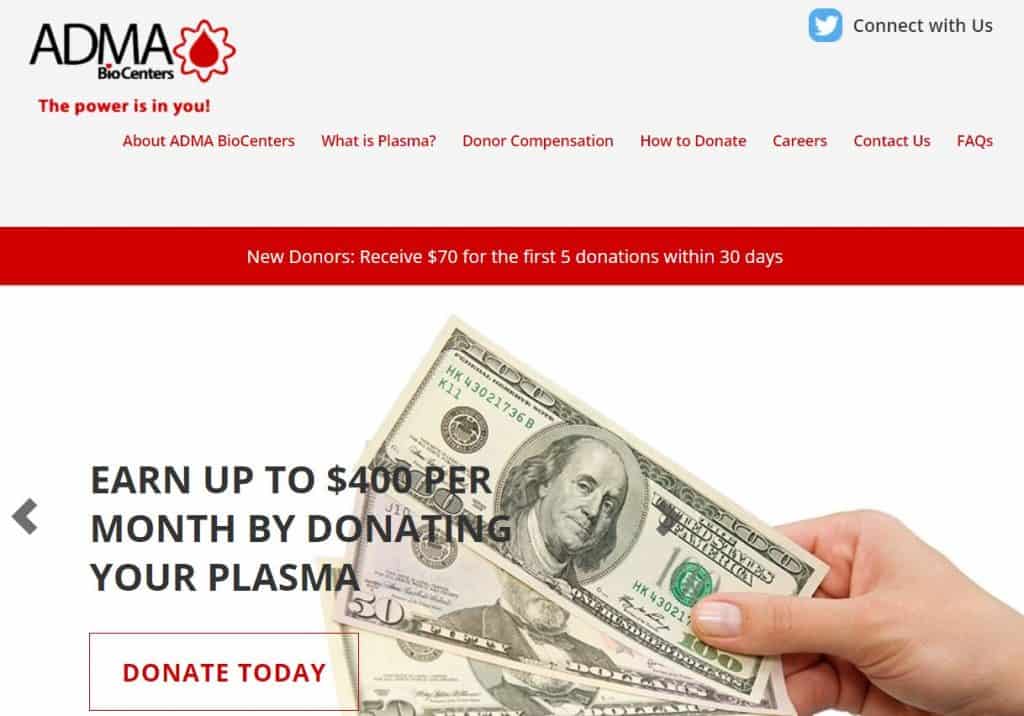 ADMA Bio Center is an FDA licensed facility specializing in collecting human plasma. They strive to provide the best in donor comfort.

Locations: 2 Locations in Georgia and Tennessee

How Much It Pays: ADMA Bio Center donors can get paid up to $400 per month. Coupons are also available to earn additional compensation on a promotional basis. Compensation amount varies by location. 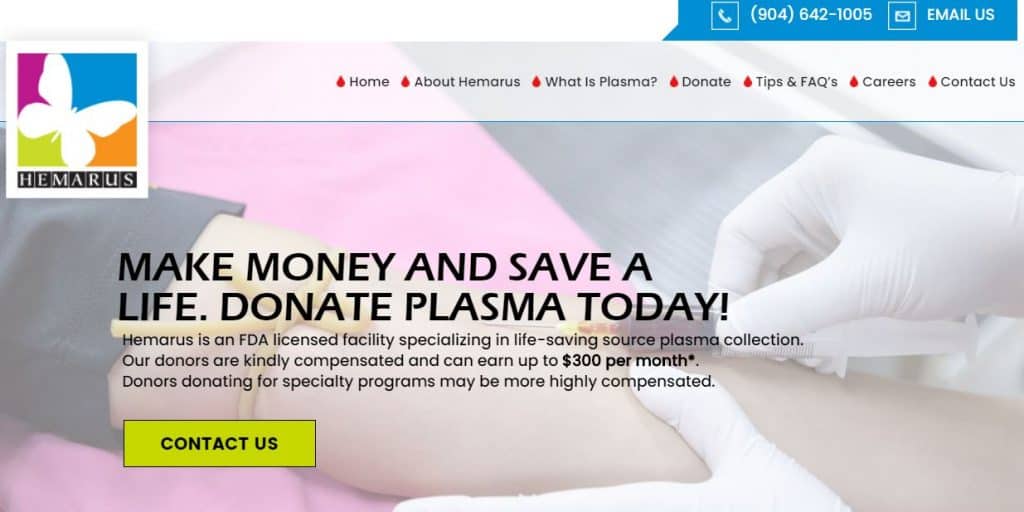 Specializing in the collection of plasma, Hemarus Plasma is a licensed facility managed by a team of experts.

Locations: 1 Location in the state of Florida

Following guidelines set by the FDA and HIPAA, Saturn Bio is among credible plasma donation centers in the United States.

Locations: 1 Location in the state of Indianapolis 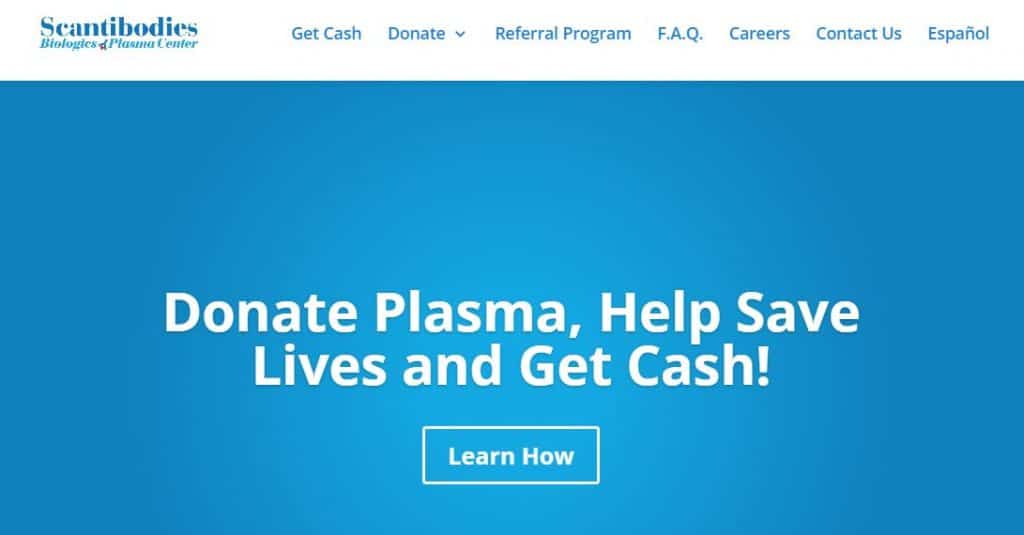 Locations: 1 Location in the state of California

How Much It Pays: New donors of Scantibodies are paid $40 for their first visit and then $60 for their second visit. Returning donors can get paid up to $60 per week. Payments are given in cash. 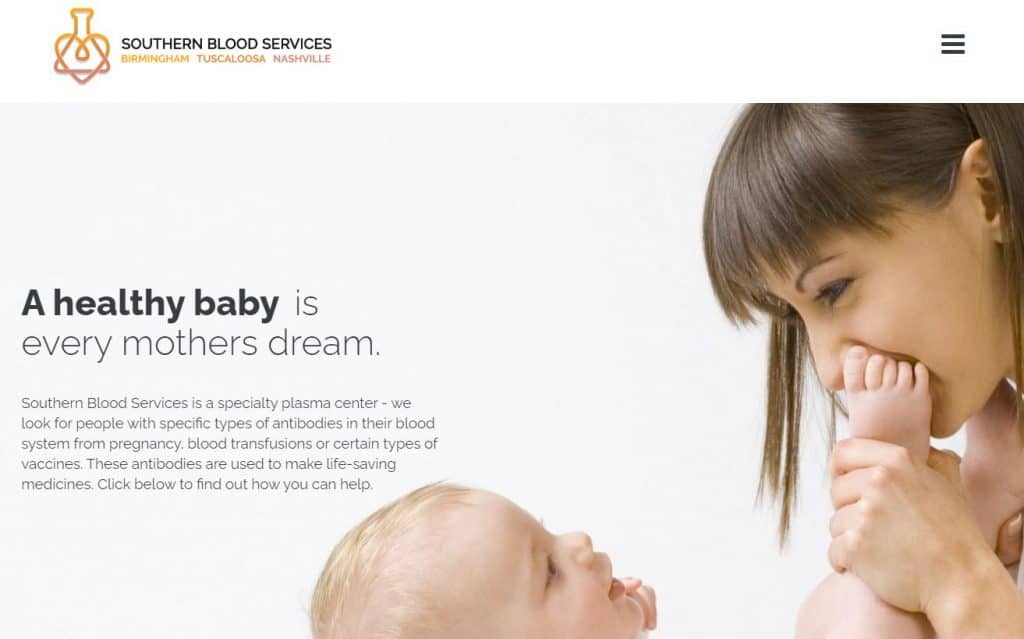 Southern Blood Services is a specialty plasma company looking for donors with specific types of antibodies in their system from pregnancy, blood transfusions, or certain types of vaccines.

Locations: 3 Locations in Alabama and Tennessee

Related: How To Get Free Airbnb Stays (Plus Make Money In The Process) 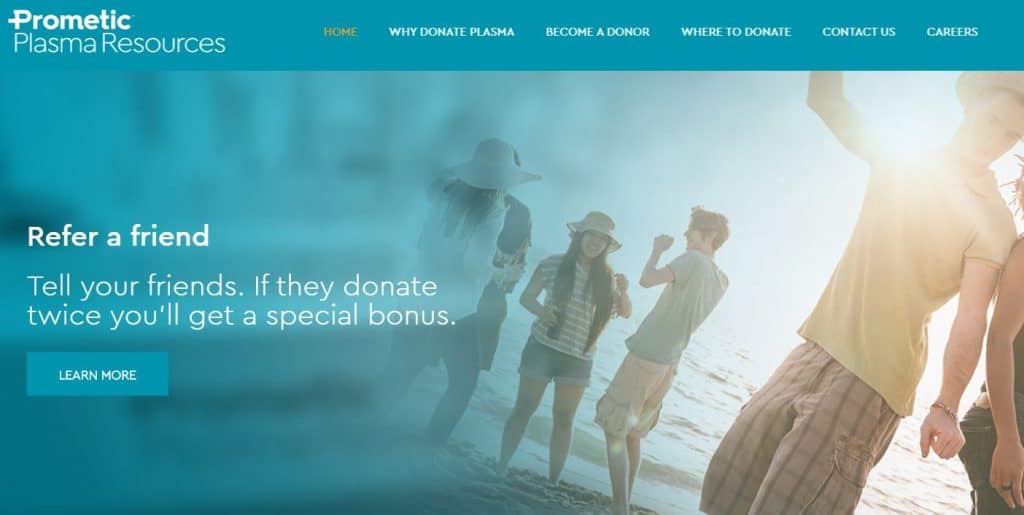 Locations: 1 Location in the state of New York

How Much It Pays: Not published. They do offer an unspecified bonus if you refer a friend who donates plasma twice.

TrueHealth Plasma (thplasma) is a plasma donation center focused on the collection of human plasma from donors.

Locations: 1 Location in the state of New Jersey

How Much It Pays: New donors can earn $50 for each donation for the first five donations at TrueHealth Plasma. Returning donors can make up to $450 per month. 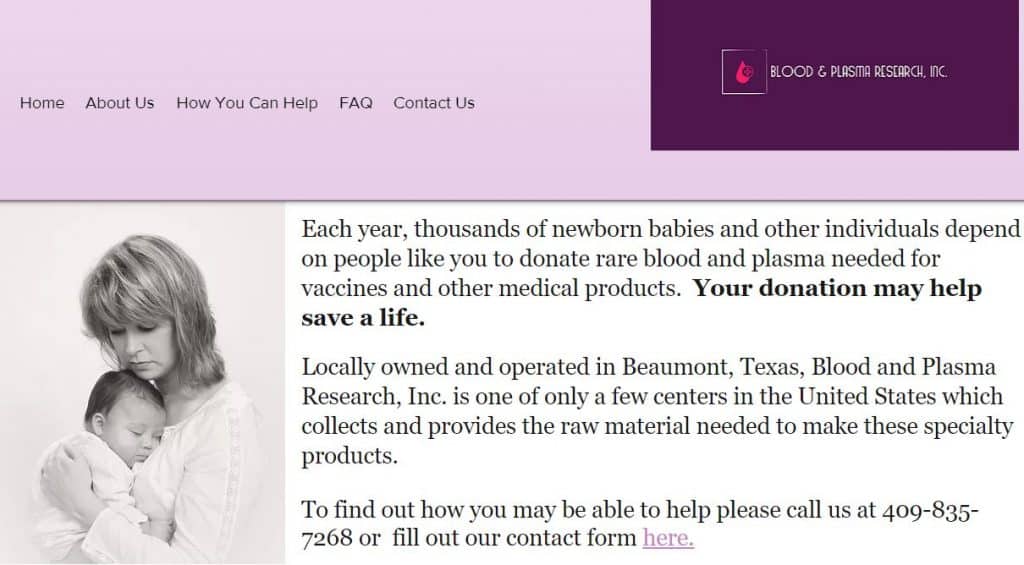 Locally owned and operated, Blood and Plasma Research, Inc. is one of a few centers which collects and provides raw materials needed to make specialty products.

Locations: 1 Location in the state of Texas

Vitalant accepts a variety of donation types, plasma being one of them. They are one of the nation’s largest and oldest transfusion medicine organizations.

How Much It Pays: Vitalant Blood Donations offers a donor rewards program allowing donors to earn points to redeem for gifts.

Carter BloodCare provides life saving resources to more than 200 medical facilities. Their history began in 1951 as a nonprofit.

Locations: Over 20 Locations in the state of Texas

The American Red Cross accepts plasma donations from donors who have recently recovered from COVID-19. Special antibodies present in recovered donors will help infected patients with treatment of the new virus.

Locations: Locations vary depending on when there is a donation drive

Related: How To Get Free Money Right Now (On PayPal Or By Mail)

Who Pays the Most for Plasma?

The compensation for donating plasma is generous for recurring donors. Based on the information provided here, donors can expect to be compensated most when going to a donation center that has multiple locations throughout the country. These are considered “chains.”

The highest paying plasma donation center near me is Octapharma Plasma. Check their locations to see if they have a center near you.

To get paid to donate plasma, donors must meet all requirements and be honest about their medical history to ensure the safety of everyone. Once a donation is complete, you can expect to receive your payment afterward.

Visit each website in this post to see if a company has a location near you. Make your donation appointment by calling them and inquire about that location’s specific fee amount for donations. Ensure you understand how often you are allowed to donate.

Donating plasma for money is rewarding for your financial gain. Additionally, consider the bigger picture on what your plasma donation is actually doing for someone else! Your donation could save a life.

Related: 18 Part-Time Jobs Online That You Can Apply For Today

Samantha is a mom to an incredible little boy and sweet baby girl. She holds her Master of Arts degree in Education. In addition, she obtained a Bachelor of Science degree in Speech Pathology and Audiology. She has many years of experience working in early childhood education and works from home as a virtual teacher. Samantha’s mission is to provide helpful information to parents looking for ways to make extra money while navigating parenthood.

Boost Your Organic Traffic with SEO! 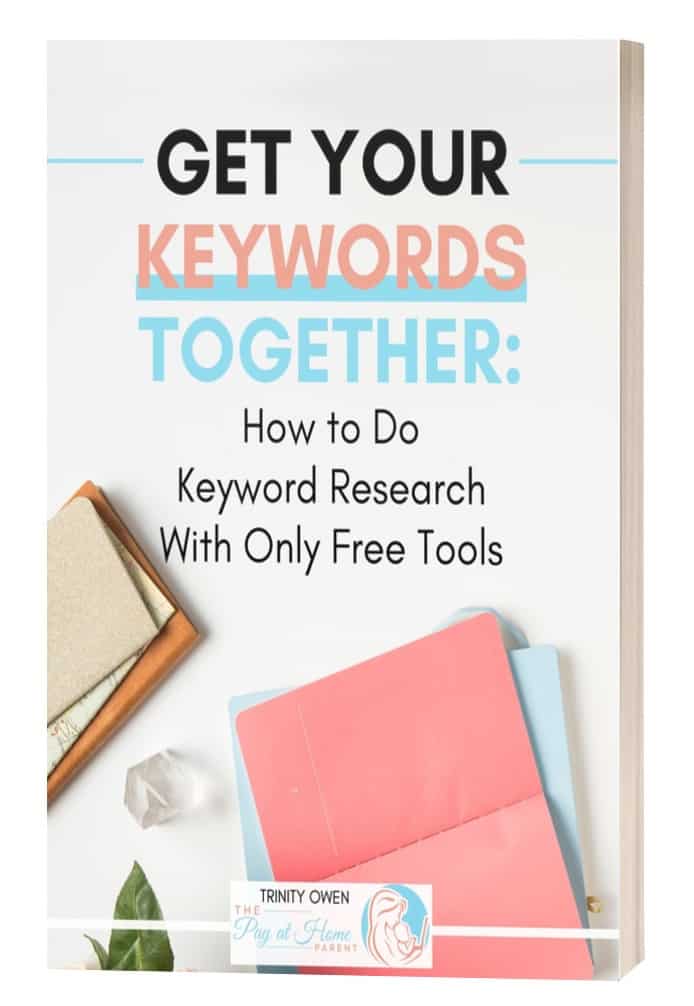